Set in the side of the hills surrounding the lake and amongst fields of ancient olive trees, descending to the eastern side of the lake is the beautiful town of Bolsena. The town has Etruscan origins and today many of the inhabitants still make a living from fishing and agriculture.
Ancient Velzna, “Volsinii opulentissima” as the Romans called it, was one of twelve “lucumonies”, the most important Etruscan cities; the surrounding area probably contained the Etruscan sanctuary called by the Romans “Fanum Voltumnae”. This was a political and religious centre, which archaeologists have taken many years to uncover. 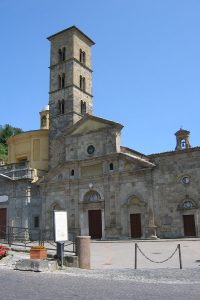 The beauty of the landscape looking south over the lake, certainly affected the Etruscan’s choice of location of the town. The Romans, who coveted the site, destroyed the city and rebuilt their city “Volsinii Novi” adjacent to the original town. The Basilica of the Miracle – Bolsena
Towards the end of the Roman period, due to the threat of persecution, the Christians concealed themselves in the catacombs, today beneath the church of Santa Cristina. At the beginning of the fourth century, during the last persecution of Diocletian, Cristina, a young girl of only twelve, died a martyr of her faith after persecution, this only a few years before Constantine’s edict ending the persecutions of the Christians. Eventually becoming a church, the area around the burial site of Santa Cristina was developed and restructured over the following centuries. In the XI century, Mathilda of Canossa had a Romanic-styled basilica built to provide a home for the relics of Santa Cristina.
Strange is the destiny of Bolsena, a city whose development was privileged by religion’s history. In 1263, Bolsena attracted the attention of the Christian world with the Miracle, creating the origin of the feast of Corpus Domini and prompting the creation of the famous painting by Raphael: “The Mass of Bolsena” in the Vatican Palace.

The Miracle of Bolsena coincided with the period in history when pilgrims from the various countries of Europe, travelled to Rome following the old historic paths, the “via Francigena”.
A priest from Bohemia, Peter of Prague, who was tormented with doubts about the real presence of Christ in the consecrated host, made his way to Rome to pray at the Apostle’s tombs. After sleeping overnight, he asked to celebrate mass at the altar dedicated to Santa Cristina. During the Consecration the host began to pour with blood, which stained the linen cloth and the marble floor. The priest fled trying to hide the event, but Pope Urban IV, under pontifical siege in Orvieto, having received the procession carrying the corporal stained with blood and having the corporal examined by the famous theologians St. Thomas and St. Bonaventure, declared a miracle. 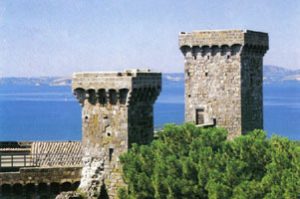 The miracle prompted Urban IV to establish the festival of Corpus Domini as a remembrance of the event and later the wonderful cathedral in Orvieto was built to house the sacred corporal. The marble floor slabs, stained with blood, are kept in the Miracle Basilica in Bolsena. The Monaldeschi Castle – Bolsena
Several itineraries are possible in Bolsena:

– The entire church of Santa Cristina with the various areas of worship (the church is actually comprised of three churches each of different ages): The Romanic basilica, the new chapel of the Miracle, the Grottos “Grotta”, the altar of the Miracle, the Crypt and the Catacombs.
– The medieval quarter grouped around the Monaldeschi Castle which houses the Territorial Museum of the Lake of Bolsena.
– The gardens and “promenades” near the lake and the harbour where boat trips are available to the two islands.
– The tour of the excavations of the Roman city, unearthed by the French School of Archaeology.