Palaces and gardens designed by famous architects, are the first examples of the so-called “Giardini all’Italiana” so admired and imitated by the French. The gardens augmenting the splendour of the sumptuous residence built for the noble Farnese family, 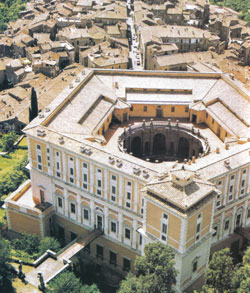 all combine to demonstrate how the area was privileged during the Renaissance period.
Surrounding Rome, the natural environment invited some of the great “Maecenas” (rich and powerful noblemen), living graciously in their magnificent villas, to spend time meditating on life and its significance.
Life and its interpretations: these monumental buildings contain many symbolic references and seem to have a common thread connecting them with the “Hypnerotomachia Polyphili” a very famous book for people studying Italian gardens, written by Francesco Colonna at the beginning of 1500. 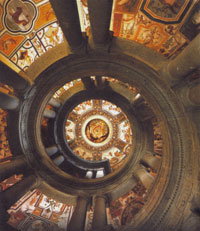 Interestingly, Price Charles became fascinated by Tuscia and for 5 years led a team of architects who were studying at the School of Architecture of which he was president. They spent at the Villa Lante and at the Farnese Palace two weeks each year, on various projects and designs. Prince Charles is one of the most important famous friends of the province of Viterbo (another being King Gustav of Sweden who visited for several years to assist in searching for Etruscan sites). In the middle of the XVI century, a famous architect, Jacopo Barozzi (known as “the Vignola”, the city of his birth), designed the Farnese Palace at Caprarola, which is considered a masterpiece of Italian art from that period. This palace is often used as a backdrop in both film and T.V. plays, because of the sumptuous paintings by such masters as the brothers Taddeo and Federigo Zuccari.
The Villa Lante della Rovere at Bagnaia reproduces much of the structure of the Farnese gardens at Caprarola but with more complexity. Here the noticeable symmetry of Vignola’s work is evident: he was quite certainly the first landscape designer. The gratifying merge of lush vegetation with water themes and the grey stone of the fountains create a luxurious sensation. 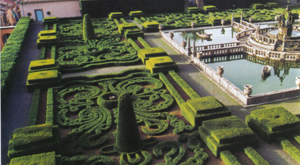 The Park of the Monsters at Bomarzoevokes a dreamy although somewhat bizarre landscape. “Qui ogni pensiero vola” is written on the face of an enormous stone mask: “Here every thought flies”. The expression of the face alters throughout the different seasons with the ever-changing vegetation. The historical references of the original creation of this “Sacred Wood” are complex 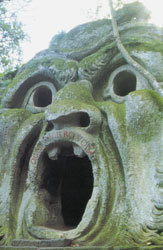 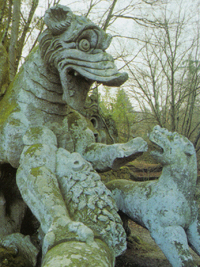 and uncertain: it is difficult to demonstrate the real contribution of Vicino Orsini to the actual structure of the park. Here, the hypothesis of archaeological pre-existences related to Etruscan culture is mysterious and fascinating.